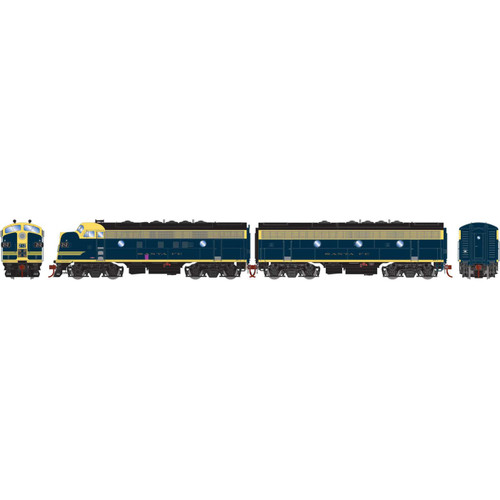 NEW FEATURES FOR ALL F-UNITS IN THIS ANNOUNCEMENT:

EMD F-units were a line of diesel-electric locomotives produced between November 1939 and November 1960 by General Motors Electro-Motive Division and General Motors-Diesel Division. Final assembly for all F-units was at the GM-EMD plant at La Grange, Illinois and the GMDD plant in London, Ontario, Canada. They were sold to railroads throughout the United States, Canada, and Mexico.

Structurally, the locomotive was a carbody unit, with the body as the main load-bearing structure, designed like a bridge truss and covered with cosmetic panels. The so-called bulldog nose was a distinguishing feature of the locomotive’s appearance, and made a lasting impression in the mind of the traveling public.

The F-units were the most successful “first generation” road (main line) diesel locomotives in North America, and were largely responsible for superseding steam locomotives in road freight service. Before this, diesel units were mostly only built as switcher locomotives, and only used in rail yards.

F-units were sometimes known as “covered wagons”, due to the similarity in appearance of the roof of an F-unit to the canvas roof of a Conestoga wagon, an animal-drawn wagon used in the westward expansion of the United States during the late 18th and 19th centuries. When a train’s locomotive consist included only F-units, the train would then be called a wagon train. These two usages are still popular with the railfan community.

This page is based on the copyrighted Wikipedia article "EMD F-unit"; it is used under the Creative Commons Attribution-ShareAlike 3.0 Unported License (CC-BY-SA https://en.wikipedia.org/wiki/Wikipedia:CCBYSA). You may redistribute it, verbatim or modified, providing that you comply with the terms of the CC-BY-SA.