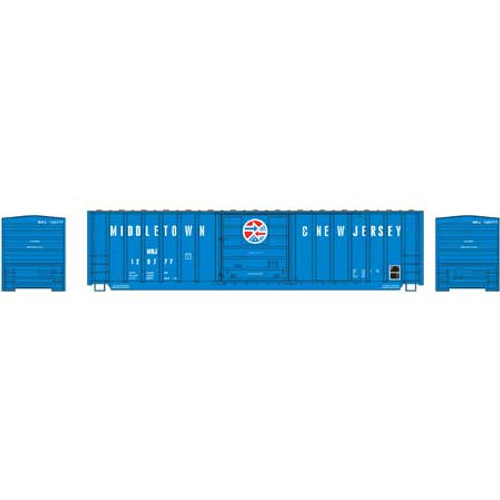 The late 1970’s were marked by a supposed shortage of modern useable box cars in the railroad industry. Several rail industry groups argued for and got the Interstate Commerce Commission to approve the concept of incentive per diem box cars. The concept was to establish new, higher per diem rates for modern box cars as an incentive for railroads to invest in new box cars. Under the ICC car routing rules in effect at the time, cars owned by operating companies were supposed to be routed back to their owning road as soon as possible or the host road would have to pay demurrage(car storage and handling) charges. This was the cause of a shortage of available cars and not an actual shortage of box cars numerically. As empty cars were required to be routed back to their home railroad instead of being loaded and routed to another destination. Very few small railroads had the available capital to invest in new cars. However, several leasing companies were created to provide the necessary capital for new cars. A typical arrangement between one of these leasing companies and a railroad was that the leasing company would own the cars and lease them to the railroad; the railroad would pay a base lease rate to the leasing company for each car, and a portion of per diem revenue earned by the railroad would also be turned over to the leasing company. Many smaller railroad companies found it economical to have interchange freight equipment for the first time in their histories under these arrangements. Lumber roads were especially pleased with these arrangements, as they allowed the railroads to provide decent, modern freight cars for their lumber shippers that also happened to produce some additional income while not on home rails.

The box car boom eventually went bust, as the incentive per diem concept was found to be illegal and abolished. With lower per diem rates and a generally lackluster economy, many of the new box cars added to the nation’s rail fleet during the mid- to late 1970’s were no longer needed. The end result was that many basically brand new box cars were returned to their home roads for storage.

Today box cars still matter to the railroads. Even with modern containerization, box cars have a higher capacity then allowable on US roads. We are finding today, that 1970’s box cars are being rebuilt and put into service for various leasing outfits.